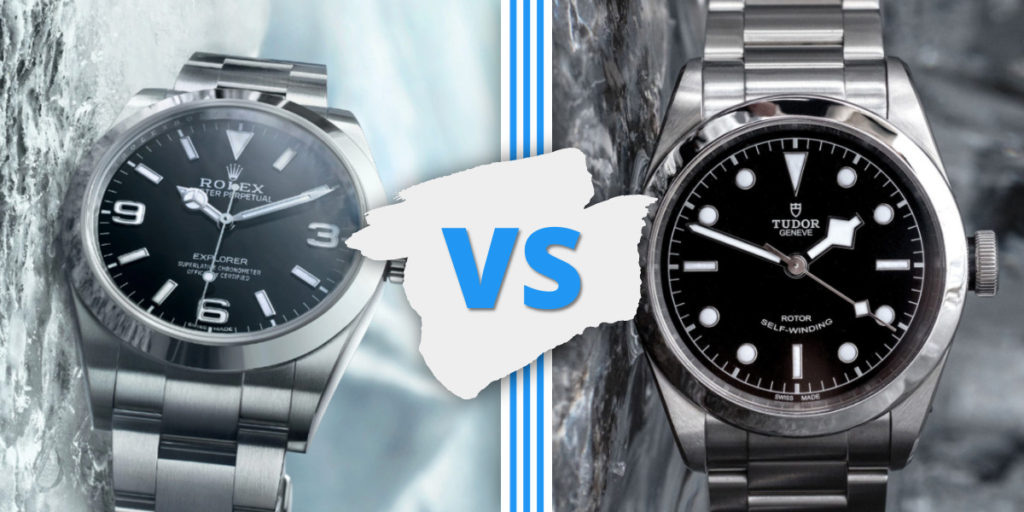 Find out what makes the Tudor Black Bay 41 Vs Rolex Explorer so unique but yet so different. Do you see the same differences that we do?

When comparing the Tudor Black Bay 41 vs Rolex Explorer we identified critical areas to evaluate that include movement, dial / hands, materials, clasps, wearability, price, and their shared relationship.

The first element of the the Tudor Black Bay 41 Vs. Rolex Explorer article that we wanted to focus on was the difference between the in-house Calibre 3132 Rolex movement compared the the outsourced ETA 2824.

Even though the reliable ETA 2824 movement has been a proven movement that’s used in many luxury timepieces, it’s still not a Rolex movement. The in-house 3132 isn’t part of the new movements Rolex has introduced lately but it’s still a simple 3-hand movement that is chronometer certified, has a long shelf live, easy to service, and engineered for everyday use.

To be fair, we do recognize why Rolex doesn’t supply its movements to Tudor. Rolex needs to maintain its exclusive quality and manufacture the Tudor brand at a lower price point. With that being said there is nothing wrong with using the ETA 2824 movement and it’s a perfect fit for the Tudor Black Bay 41.

Most watch lovers compare the Tudor Black Bay 41 vs Rolex Explorer because of the perceived similarities in the dials. Honestly when we compared the two dials, we noticed more differences than similarities.

The hour and second hands are the first differences we saw in the dial/hands design. Rolex originated the “Mercedes” hour hand but Tudor has gone out on a limb with the “Snowflake” design and has done well. We always appreciate bold new watch design that land well with the watch community.

Again, we see the dials as more different than the same and the indices are a prime example of that. The Rolex Explorer has lumed sticks with mixed with roman numerals. The Tudor Black Bay 41 is equipped with a mixture of lumed dots mixed with sticks at the 3,6,9 o’clock markers.

The final difference when comparing the Rolex Explorer vs Tudor Black Bay 41 is the text on the dials. The Explorer hands down has the Black Bay beat. Considering todays watch technology, Tudor should be above showcasing that they have self-winding rotors.

Back in the day Rolex was on the forefront with watch material technology. They were the first to utilize the 316L stainless steel and the rest followed. Well now Rolex has introduced the 904L stainless steel, which is on the forefront of steel technology. Even though 904L isn’t as scratch resistant as 316L, it makes up for its long term viability to hold its original look and feel. Essentially 904L is going to allow your Rolex to look new for much longer than its predecessors.

Tudor hasn’t yet caught up to the material technology that Rolex has but for some that may not matter. If a more scratch resistance material is for you, maybe the Tudor Black Bay 41 is for you. If you care about long term health of your watch, the Rolex Explorer is for you.

After comparing the two different clasps, the Rolex Oysterlock clasp is the clear winner. That is not to say that the Tudor clasp isn’t sufficient but there is nothing special about it. The Oysterlock clasp simply looks, feels, and has the haptics of a better clasp. Surprisingly the clasp was one of the most enjoyable aspects of my first Rolex. You can check out that review here, Rolex Datejust 41.

Across both brands lineups, Rolex will always be purchased at a higher price point. This includes both new and used watches. With that being said, Tudor is known for its value. Tudor is viewed by a lot of watch enthusiasts as a value brand where they can get great watches at the fraction of what a Rolex costs.

The Rolex Explorer can be purchased for $7,200 but don’t expect to pay that amount. The Explorer is a part of the stainless steel sports watch craze and they can hardly be found in the case. If you’re lucky enough to get put on the waitlist for this item go for it. For the rest of us, you’ll be able to purchase it for roughly $7,000 – $8,000.

The Tudor Black Bay 41 can be purchased new $3,050 in different variations. Different dial colors include black, blue, and champagne (two-tone model). These watches are not as in demand as the Rolex Explorer. Buying these watches new at MSRP shouldn’t be an issue.

If you didn’t already know, Tudor is owned by Rolex and has been for some time. The relationship between the two though goes much deeper than ownership rights.

Throughout the years Rolex has relied on its little brother, Tudor, to be more aggressive in design, modernization, and case materials. In the early days of the relationship Tudor watches closely resembled Rolex and sometimes even shared the same name like Submariner or Datejust. Like it or not, Rolex owns some of the most icon designs in watch making history. That makes it hard to move off current models / designs to try something new. Because of that reason, that is why we more modern aggressive watch design that come out of Tudor, which many believe that they are what Rolex could be if they ever moved off their classic designs.

Even though Tudor resides at a lower price point than Rolex, don’t expect the quality to be that far off. Take a look at the Black Bay 58 for example. There is a growing number of buyers who are preferring those compared to the traditional Rolex Submariner. Many of the same parts and materials used are done forged in the same manufacturing plants as Rolex to take advantage of economies of scale and skilled workforces. The main difference between Rolex and Tudor is the movements.

Discover the best Rolex watches for men in 2022 and why they made the shortlist of the best in production. Find pricing & reviews.

What Is The Rolex Waitlist & How Long Will You Wait

Discover our Top 10 Rolex 2022 Predictions. Our in-depth analysis has us excited about what Rolex might release for the 2022 year.

How Much Is A Tudor Watch: Tudor 2022 Pricing Guide

Rolex 2022 Price Increase By The Numbers

How Much Is A Rolex: Rolex 2022 Pricing Guide

Rolex vs Tudor: How The Models & Brands Compare Against Each Other

At Wrist Advisor, we offer honest and unbiased expert watch reviews on popular and interesting watches. We pride ourselves on being the expert authority on providing accurate information and in-depth analysis on the watches that our readers enjoy.

Our goal is to provide informed and insightful luxury watch reviews that are based on facts and research that our readers will find resourceful.

We appreciate being your trusted source of watch news, reviews, and much more. Thank you for allowing us to be a part of your horological journey.